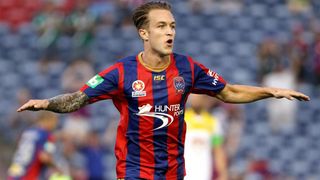 Perth Glory have signed striker Adam Taggart from Fulham, although he will not be able to play this season due to FIFA rules.

The 22-year-old returns to his home-town club, where he made his senior debut in 2011, following an unsuccessful 18-month stint at Fulham in the Championship.

Under FIFA rules, Taggart will not be eligible to play for Perth for the remainder of this campaign because he has already played for two clubs in one season - Fulham and Dundee United, where he was on loan earlier this term.

But the Socceroos forward can be registered with up to three clubs in the same timeframe and has signed a contract until the end of 2017-18.

Taggart won the A-League Golden Boot in 2013-14 while he was at Newcastle Jets and was also named the A-League's Young Player of the Year.

He was included in Australia's squad at the 2014 World Cup in Brazil and took part in the Under-23 team's recent failed campaign to qualify for this year's Olympic Games in Rio de Janeiro.

"Adam is a quality player and person, who can add value to what we are trying to build at Perth Glory," said Glory coach Kenny Lowe.

"I've known 'Taggs' for many years and I think being at home around his family, will help re-invigorate his focus on his game."

"All our decisions during the January transfer window have been consistent with our strategy to build a squad for success over the coming years" he said.

"We are excited to land the signature of Adam Taggart, who has attracted interest around the globe and we have beaten several Australian and overseas clubs for his signature."

Taggart is expected to join Perth for training on Thursday.