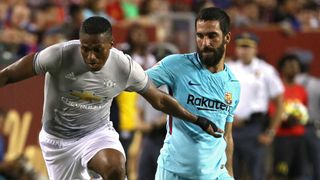 Galatasaray are waiting for the green light from Barcelona to make a move for Turkey international Arda Turan.

Arda joined Barcelona from Atletico Madrid two years ago but was prevented from making his debut until the midway point of the 2015-16 season due to the LaLiga giants being under a FIFA player registration ban.

The 30-year-old struggled to recapture his stellar Atleti form and, after an encouraging start last term, injuries played their part in reducing him to a bit-part role in Luis Enrique's squad.

Arda did not feature in the Joan Gamper Trophy match against Chapecoense on Monday and appears not to be part of new boss Ernesto Valverde's plans.

He has been linked with a return to Atletico, who - in a quirk of fate - find themselves in the same registration-ban limbo as Barca did two years ago, although Catalan newspaper Sport claims the attacking midfielder's representative Ahmet Bulut recently met with Galatasaray president Dursun Ozbek to discuss Arda going back to his first professional club.

Nevertheless, Ozbek told NTV Sports there is still work to be done if Igor Tudor's squad is to be bolstered by a player he admires.

"Arda Turan is a footballer who is always on the agenda of Turkey and would be very good for Galatasaray," he said.

"Everyone is doing what they are doing and everyone is interested. But it is not possible for us to have meeting with Barcelona without permission from Barcelona."

Arda quit international football at the end of last season following a bust-up with a Turkish journalist.