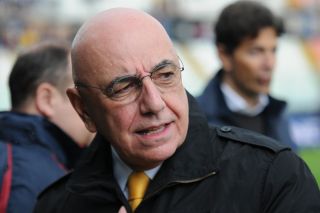 The 18-time Italian champions have signed Adil Rami and Keisuke Honda already in January as they look to improve on their current position of 13th in Serie A.

Milan have been linked with a move for Cagliari midfielder Radja Nainggolan, but Galliani insists it is unlikely the Belgium international will end up at Milan before the transfer window shuts.

"Currently our squad is at 30 - we need to thin that out by two or three players, then we will see if a midfielder can arrive," Galliani said.

Milan return to Serie A action on Monday against Atalanta, hoping to collect just their fifth win of the season.