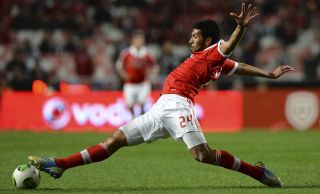 Garay, 27, was strongly linked with a move to the Premier League champions through the early stages of 2013 but nothing materialised.

And the Argentina international has revealed that the reason for his move collapsing was the departure of former manager Alex Ferguson.

Garay feels that new boss Moyes did not have faith in him and that his big move to the Premier League – estimated at £18m – was blocked by the Scotsman as a result.

He said: "I believed I was going to join Manchester United in the summer. The deal was nearly closed but finally Benfica did not accept the offer.

"I believe the exit of Ferguson has influenced the deal. Moyes did not believe in me as much but that's not a problem.

"I am happy at Benfica and have a lot of dreams and ambitions for this season. Now I only think about the present which is Benfica but it's never possible to discard anything in the future."

The centre-back – who formerly played at Real Madrid and Racing Santander – has been linked with a switch to Barcelona in recent times.