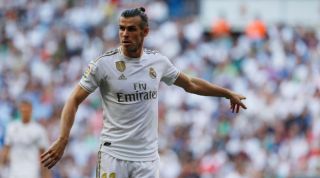 Manchester United will not make a move for Real Madrid forward Gareth Bale due to concerns over his injury record, according to reports.

The Wales international came close to leaving Madrid for the Chinese Super League in the summer, only for president Florentino Perez to pull the plug on the deal at the last minute.

United were also offered the chance to sign Bale on a season-long loan after Madrid boss Zinedine Zidane told the winger that he was not in his plans.

The Red Devils were tempted by the opportunity to land such a high-profile superstar, but ultimately turned it down because they were concerned about his fitness.

United felt the deal would represent too big a risk as they would have had to pay his £500,000-a-week wages.

Bale was reintegrated into the Madrid first team at the start of this season and appeared to have resurrected his career at the Santiago Bernabeu.

However, relations between the Welshman and Zidane have subsequently soured once more, and Bale now wants to call time on his Madrid spell.

The former Tottenham man had previously declared that he did not want to leave the Spanish capital, but he is now “fed up” with how he has been treated by Zidane.

Bale is likely to seek an exit route when the transfer window reopens in January, but the Daily Mirror report that United will again avoid making an offer.

The only circumstances in which United’s stance would change is if Bale agreed to a pay-as-you-play deal which would tie his earnings to his fitness.

The Red Devils would prefer to target Borussia Dortmund winger Jadon Sancho, who is 11 years the junior of Bale.

Ole Gunnar Solskjaer’s side could climb into the top half of the Premier League table when they visit Carrow Road to take on Norwich on Sunday.