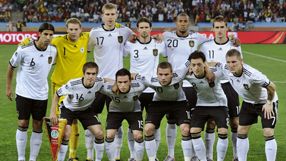 "I can still remember our international matches against them, most of which we lost," said former France captain and UEFA boss Platini.

"Sometimes they wore white tops, sometimes blue," he said, speaking in German, as the country's footballing elite marked the anniversary.

"(Speaking in German) is paying homage to a very important occasion," said Platini.

West Germany usually wore white shirts, their socialist East German counterparts, who last played as an independent nation in September 1990 in a 2-0 win in Belgium, sported their traditional blue.

Earlier in 1990, West Germany had won their third World Cup. In 2002, as a unified team, they played their first and only World Cup final to date.

Arguably, East Germany's biggest moment on the world stage came in 1974 when they stunned World Cup hosts and eventual winners West Germany 1-0 in a politically-fuelled game with a goal from Jurgen Sparwasser, who later fled to the West.

In a special match on Saturday, a group of players from the 1990 World Cup winning team, including captain Lothar Matthaus and Jurgen Klinsmann, lost 2-1 to an East German all-star side that included Ulf Kirsten and Andreas Thom.