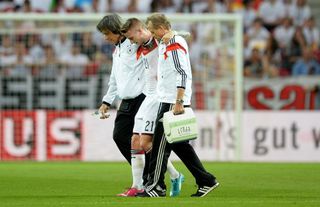 Reus twisted his left ankle in a contest with Artur Yedigaryan just before half-time in Germany's 6-1 friendly thrashing of Armenia in Mainz on Friday.

The German Football Association (DFB) announced on Saturday that the Borussia Dortmund forward suffered "a partial tear of the anterior syndesmosis ligaments above the left ankle", but he still looks set to travel to Brazil with the rest of coach Joachim Low's party.

The DFB added: "The participation (of Reus at the World Cup) is still open - more decisions are to be made at a later date."

Reus is a key member of the Germany team, scoring five goals in their qualifying campaign, and also enjoyed a superb 2013-14 season at club level, finding the net 23 times in 40 appearances for Dortmund.

Germany begin their World Cup campaign against Portugal on June 16.