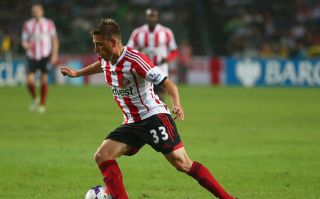 Former Sunderland boss Paolo Di Canio bought his 28-year-old compatriot from Juventus for a reported fee of around £6.8million in the close-season.

Di Canio has since been replaced by Gus Poyet at the Stadium of Light after the side picked up just one point from the opening five Premier League games of the season, with caretaker manager Kevin Ball then overseeing defeats to Liverpool and Manchester United before Poyet's arrival.

However, Giaccherini has insisted he has no regrets about swapping the Serie A champions for the Wearside outfit, and is eager to make sure he uses the opportunity to get first-team football to earn a spot in his country’s squad for Brazil 2014.

"I wanted to come to England to play regularly. At Juventus, I wasn't given a consistent place in the team," he told the Sunderland Echo.

"And next summer is the World Cup, so I needed to play regularly.

"The World Cup was a big reason behind me coming here."

Sunderland will look to pick up their first Premier League win of the season when they travel to Swansea City in Poyet's first game in charge on Saturday.