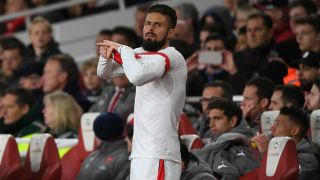 The future of Arsenal striker Olivier Giroud could well depend on the club's plans surrounding Arsene Wenger, according to his agent.

The France international enjoyed a strong run of form at the turn of the year but has only scored once in his last eight Premier League appearances.

Wenger has yet to confirm whether he will sign a new contract with the Gunners or leave his position at the end of the season and the uncertainty has prompted speculation of a possible move for a number of first-team players.

Giroud has himself been linked with a return to Ligue 1 with Marseille, but although Michael Manuello has denied those rumours, he did make it clear that Arsenal's project beyond this season could play a big part in his future plans – regardless of whether Wenger stays.

"There was talk that Olivier was in contact with [Marseille head coach] Rudi Garcia," he told Foot Mercato. "I said that that was false. There is no contact between Marseille and us. At this point, there is no contact.

"Olivier wants to help his team qualify for the Champions League. When we know exactly what Arsene Wenger is doing, we will ask ourselves questions. We will think about what is possible and what is not possible.

"When Olivier and I talk, there are no discussions about other projects. His future is not only linked with that of the manager.

"It is linked to what Arsenal are going to do and if there is a change at Arsenal in terms of how Olivier is implicated at the project.

"Things have not changed since his contract extension. Our desire is be at Arsenal long term. Olivier has been there for five years. The aim for Olivier is still to go as far as possible in this adventure with Arsenal to do great things there.

"At some point, if the two are to separate, we will see."