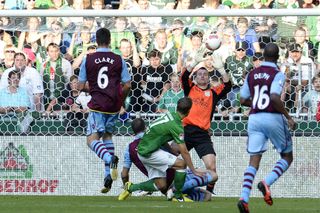 Given is not in Paul Lambert's first-team plans at Villa Park, with Brad Guzan and Jed Steer preferred ahead of him.

The 37-year-old former Manchester City and Newcastle United keeper explained the difficulty he has found with not playing regularly and is hoping for a switch in January.

"When you have played virtually every game throughout your career it is difficult, especially when you think you should still be playing," he said.

"I will just train hard until January and hope something comes up."

Given has not played for Villa since their 2-1 FA Cup defeat against Millwall in January.

While he remains frustrated at his lack of match action, Given is confident he can get a move away and enjoy regular football again.

"I am disappointed I am not involved but I still have three years left on my contract, and I know I am fortunate to have that security," he continued.

"There’s a lot of good lads out there who haven’t even got a club at the moment. I could still be sitting here this time next year, no change, or something might come up in January."