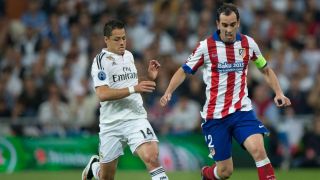 Diego Godin said he had no hesitation in signing a new contract with Atletico Madrid despite reported from the likes of Manchester City and Chelsea.

The Uruguay captain last week agreed a new four-year deal with Atletico to put an end to speculation over his future.

Godin has became a key player at the heart of the Atleti defence following his move from Liga rivals Villarreal back in 2010 and his assured performances were said to have attracted interest from Premier League rivals City and Chelsea, amongst others.

The 29-year-old stressed that he had no interest in leaving Vicente Calderon, stating that it was an easy decision to remain with Diego Simeone's side.

"I am very happy to have renewed with the Athletic." he said at a press conference on Wednesday.

"I want to thank the club, my team-mates and the coaching staff

"I have taken a decision with the heart, for the love that the people give me every day  The club has made ​​a great effort for me to stay here

"I always wanted to stay at this club. I am in the prime of my career."