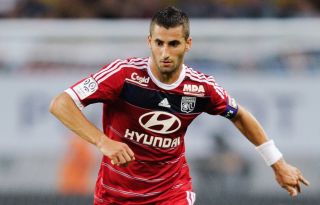 Gonalons is firmly established as a member of Lyon's starting XI, his impressive performances a key factor in the club's third-place finish last term.

Napoli were linked with a move for the France international in the close-season, but did not secure a deal for his services.

The 24-year-old's representative confirmed talks did take place with the Serie A club and believes his client could move to the Stadio San Paolo when the transfer window reopens at the start of the new year.

"But since then I have had no news about it. I do not know.

"Maybe Napoli are still looking for a player with his characteristics in January.

"A transfer can be done, but Napoli have to accept the demands of Lyon and the player."

A product of Lyon's academy, Gonalons has made more than 160 appearances in his time at the Stade de Gerland.

He won the Coupe de France with Lyon in 2012 and scored four goals for Remi Garde's side as they clinched a place in the UEFA Champions League play-off round last term.