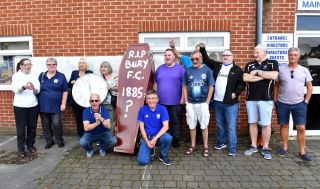 Greater Manchester Combined Authority has joined forces with local MPs and a Bury fans group in a bid to save the club.

Bury were expelled from the Football League last week, losing their place in Sky Bet League One, after C&N Sporting Risk pulled out of a takeover.

"We firmly believe it is better to work to save @buryfcofficial rather than the club be forced to start again."— Mayor Andy Burnham (@MayorofGM) September 2, 2019

“We are establishing a working group to develop a proposal to the Football League that would allow Bury to be admitted to Sky Bet League Two for the start of the 2020/21 season, subject to the submission of a credible plan to rebuild Bury FC before the end of this year,” GMCA said in a statement.

“First, we will work to develop a clear proposal to the English Football League, by Friday September 20, that will allow us the opportunity to work towards re-entry to League Two.

“Second, if the EFL agree to that proposal, we will then work on a credible plan to rebuild the club, which all signatories to this statement will feel able to endorse.

“Third, if that credible plan fails to emerge within in the deadline then we accept the EFL’s right to impose their original decision.”

Bury’s EFL membership was withdrawn by the EFL last week following the collapse of C&N Sporting Risk’s takeover and after the League One club had failed to show they could pay their debts.

Bury said they were “dismayed and astonished” by the EFL’s decision and current owner Steve Dale claimed he had shown that the club had received another takeover offer from “a credible bidder”.

⚪️🔵 Everyone at #buryfc are overwhelmed with the support shown for us up and down the country, from the Premier League all the way down the pyramid, thank you to all the #footballfamily#thislovewilllastforever 💙 pic.twitter.com/CZefmvZ6KI— Bury Football Club (@buryfcofficial) August 31, 2019

GMCA added: “We are pleased that Steve Dale has agreed to give us a short period of time to identify a suitable new owner for the club – we ask in good faith that the current owner allows us the opportunity to take forward this proposal.

“To give the EFL confidence in the process, the Greater Manchester Combined Authority and Bury Council will work together to provide the necessary external challenge to ensure any proposal is financially viable and can deliver stability for both the club and the league in the long term.

“We firmly believe it is better to work to save Bury FC as a trading entity rather than the club be forced to start again from scratch next season.”