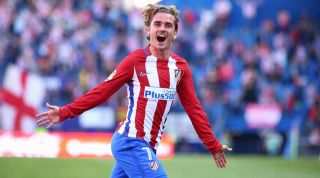 The Red Devils had been tipped to sign the French forward from Atletico Madrid and team him up with his fellow countrymen Paul Pogba and Anthony Martial.

But the Spanish capital club are now unable to sign any new players until January – after a transfer ban originally handed out in July 2016 was upheld by the Court of Arbitration for Sport last month – and so Griezmann opted to remain in Madrid.

Several articles surfaced suggesting that the striker – who has scored 60 goals in 111 La Liga appearances since joining Atleti from Real Sociedad in 2014 – called Mourinho up to inform him of the decision to extend his Rojiblancos deal until the summer of 2022.

But in an exclusive interview with FFT, the 26-year-old insists he did no such thing.

“I have stayed mainly because of the transfer ban. Atletico needed me now more than ever and I felt I had to stay. It would be dirty to leave. I wouldn’t have been myself, or the person that I feel I am today, if I had left this club in that way.

“I spoke to Diego Simeone about the situation, our options and how he wanted me to stay to work out what we could do. Then we finalised everything with [chief executive] Miguel Angel Gil. I have too much respect for this club and the people in it to leave now because, just like Real Sociedad, they’ve given me everything.”

He won’t be going anywhere this summer, then, but that hasn’t stopped the rumour mill from predicting Griezmann to join Manchester United next year, especially with his buyout clause remaining at €100 million despite penning a new contract.

But the goal-getter won’t be drawn on hypotheticals that are so far down the line, saying: “To be honest, I don’t know. I’m going to be playing for Atletico next season and after that we’ll see. All I am thinking about now is Atletico Madrid. I think it’s absurd to talk about something that is more than a year away.”

Read the full interview with Antoine Griezmann in the August 2017 issue of FourFourTwo magazine, in which we hit the campaign trail with World Cup winner-turned-senator Romario and go One-on-One with former Bayern Munich left-back Bixente Lizarazu. Plus, we attempt to impress LA Galaxy scouts at an open trial in London, recall the Rumbelows Sprint Challenge and Dallas Tornado’s mental world tour, and celebrate Serie A during the 1990s. Order it now, and then subscribe!