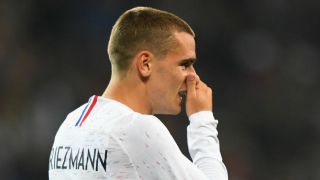 Antoine Griezmann claims he is not upset by continued speculation over a potential move from Atletico Madrid to Barcelona.

Griezmann, Atletico's two-goal hero in the Europa League final, is reported to have a release clause of €100million in his contract.

With LaLiga's champions reported to be ready to snap up Atleti's star man, Griezmann previously said he would decide his future before the World Cup.

And ahead of France heading to Russia, the striker indicated he is shrugging off reports about his future.

"No, I'm not upset, I'm fine, with full confidence," Greizmann said to Telefoot.

"And the most important thing is that I'm happy, that's what matters.

"I trust this team, we must keep our feet on the ground and do everything possible to try to make it at the World Cup."