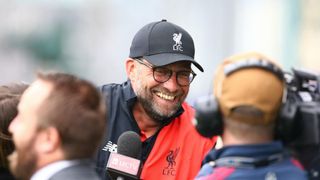 Marko Grujic scored on his debut and Roberto Firmino netted a late double as Liverpool thrashed Fleetwood Town 5-0 at Highbury.

Having beaten Tranmere Rovers by a solitary goal in their first pre-season encounter, Jurgen Klopp's men won in convincing fashion this time around despite Danny Ings' early penalty miss, with Ben Woodburn and Lucas Leiva the other scorers.

Liverpool have additional friendlies to come against Wigan Athletic and Huddersfield Town prior to their pre-season tour of the United States.

Ings was given the chance to open the scoring with just 13 minutes played after Grujic - who also hit the post in an impressive performance - was tripped by Akil Wright in the box, but the striker saw his penalty parried away by Chris Neal low to his right.

Liverpool only had to wait another five minutes before they did break the deadlock. Alberto Moreno's low cross evaded everyone inside the six-yard box, but Grujic collected possession unmarked on the edge of the area, and his side-footed effort took a deflection on its way past Neal.

Klopp made 11 changes at half-time, but the visitors had more joy in the second half.

They were 2-0 ahead seven minutes after the restart when Lucas' throughball released Ryan Kent, who squared for Woodburn to tuck home is finish at the far post.

Lucas struck himself with 21 minutes remaining, finding the bottom corner from 12 yards after Firmino and Kent had exchanged neat passes.

Within 72 seconds of that strike it was four when home goalkeeper Alex Cairns raced out to deny Woodburn, but could do nothing as Firmino followed up to strike into an empty net.

And Firmino got his second in stoppage-time, slotting in from inside the six-yard box after a cut-back from the lively Woodburn.