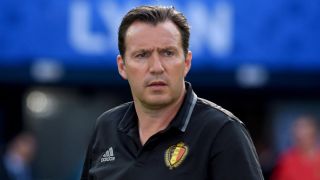 Belgium coach Marc Wilmots has confirmed Thomas Vermaelen is fit to face Italy at Euro 2016 but will not reveal the solution to his defensive injury crisis.

Belgium are without several defenders for their opening game of Group E against the Azzurri in Lyon on Monday, including Nicolas Lombaerts, Bjorn Engels and Dedryck Boyata.

The biggest loss is captain Vincent Kompany, with some suggesting Wilmots may opt to employ Toby Alderweireld and Jan Vertonghen in the middle - where they play for club side Tottenham - rather than at full-back, their regular roles in international football.

Vermaelen's availability is a boost for the Red Devils, after the Barcelona player, who has been plagued by fitness trouble in recent seasons - overcame a scare.

"It wasn't an injury, he just felt a bit tight in his calf, having played first 60 and then 90 minutes," Wilmots said, referring to Vermaelen's involvement in Belgium's pre-tournament friendlies.

"Once we'd given him time to recover, the last few training sessions we haven't seen any problems with him in terms of his ability to play 90 minutes."

But Wilmots' opposite number Antonio Conte must wait for shortly before kick-off at Parc Olympique Lyonnais to learn how Belgium will line up.

"But I understand why the pair are very widely respected in England. As you know they've been playing left and right-back for me in the last few years and they've helped to make us one of the best sides in Europe. We've had to tweak things a little bit and you'll find out tomorrow."

Eden Hazard will skipper the team in Kompany's absence and the Chelsea star knows the importance of his team making a strong start to their first fixture.

"We hope we can reach the final," he said.

"Every game is tricky. We're going to try and win our opening match and see how far we can go.

"We're a little bit of an outsider if you will. We haven't put any specific pressure on ourselves. We're used to playing on these big occasions. We have a number of players playing for the best club sides all over the world.

"Perhaps the first match is the most important game of the competition. If you start with a defeat it's never great because you put additional pressure on yourself right from the outset.

"If, however, you start with a victory, you're able to let off some pressure and put additional pressure on opposing sides.