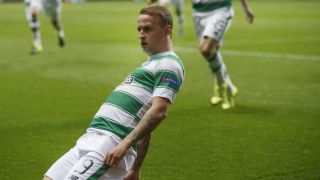 Celtic moved to within a point of the Scottish Premiership summit with a come-from-behind 2-1 win over Hamilton Academical at New Douglas Park.

Ronny Deila's side took advantage of leaders Aberdeen's 5-1 thrashing against St Johnstone to close the gap at the top, despite falling behind to Gramoz Kurtaj's early goal.

The visitors were seeking to bounce back from the disappointment of surrendering a two-goal lead to draw 2-2 with Fenerbahce in the Europa League on Thursday and stirred into life before the break.

Dedryck Boyata - partly at fault for the opening goal - and Leigh Griffiths struck within six minutes of each other to secure the points for Celtic.

Kurtaj gave fourth-placed Hamilton the lead with four minutes gone after getting the better of Boyata and finishing coolly past Craig Gordon.

The leveller came via Boyata, who turned home Griffiths' free-kick, before provider turned scorer with a fine header.

Ali Crawford forced a superb second-half stop from Gordon as Hamilton went in search of an equaliser, but their efforts proved fruitless.