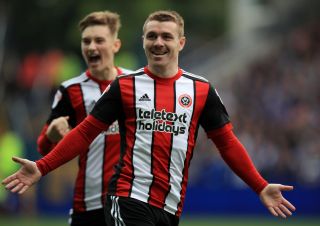 Since becoming manager of his boyhood club in the summer of 2016, Wilder has taken the Blades from League One to the Premier League.

United are ninth in the table following Monday night’s 1-0 victory over Arsenal at Bramall Lane.

Fleck has been along for the ride from the beginning after being signed by Wilder shortly after his appointment and the Scottish midfielder insists there is no secret formula to their recent success.

“It’s just hard work, honestly,” said Fleck. “Just trying our best every day in training and that was his message from the start. You must try your best and see where it takes you and it has taken us this far.

“Since the manager came in the club has been on the up and we still seem to be going that way.

“We all understood how difficult this league was going to be and how hard it is to pick up points, but we’ve done well so far. However, we know there are more tough games to come as well so we must keep working hard because we can always improve.”

Heading into the Arsenal match, the feeling at Bramall Lane was that performances had not brought the number of points they deserved, having lost consecutive home games against Leicester, Southampton and Liverpool.

So Fleck was pleased to see everything come together on Monday night, he said: “The problem with the last few games at home is we have played well and got nothing from the games so it was important that we got a big victory and we have done that.

“It’s fantastic and great for the fans that we got the result. For us, it’s just the same as every other week and we work as hard as we can and then try to get our rewards in the match.

“We will enjoy the moment but we’ve now got a difficult game against West Ham at the weekend, so it doesn’t get any easier.”