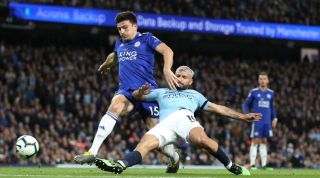 The England centre-back is at the top of Ole Gunnar Solskjaer’s wanted list as he looks to reinforce his backline ahead of the 2019/20 season.

Manchester City have also expressed interest, but the Daily Mail reports that the Red Devils are optimistic of securing his signature.

The Old Trafford hierarchy will back Solskjaer’s vision with a lucrative contract offer for the 26-year-old.

However, negotiations continue to take place as the clubs look to bridge the gap in valuation, with Leicester setting an £85 million price tag but the Red Devils looking to close a deal for around £75m.

Maguire’s preference was originally to join City, but the Etihad club don’t want to meet the Foxes’ demands – giving their neighbours the upper hand.

Leicester aren’t interested in a cash-plus-players deal, which United have proposed, but the King Power hierarchy have begun to consider replacements including £40m-rated pair Lewis Dunk and James Tarkowski.