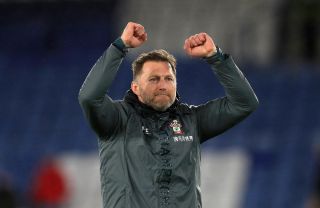 Southampton manager Ralph Hasenhuttl claims his players wanted to write their own story against Leicester after the humiliation of October’s 9-0 defeat to the Foxes.

While Hasenhuttl shied away from suggesting the 2-1 win at the King Power Stadium was revenge for the mauling at the St Mary’s nearly three months ago, it was clear the victory meant a great deal.

“We never spoke revenge or something,” said Hasenhuttl. “We should be thankful for this result from this first game, and that’s what I’ve always said to the players.

“But we wanted to show everybody watching us that we can do much better, and what this team has changed since then.

“We’ve changed everything – the behaviour, how we play, how we create chances, the commitment, the belief in what we are doing.

“At the moment we are really hungry, and if you are hungry then you can hunt for 90 minutes, or longer, and that’s one of the reasons why we are successful now.

“We will never forget the result of the first game, but the second part of the story was for us, and that was the target today.”

Despite Dennis Praet scoring his first goal for City since his £18million move from Sampdoria in August, completing a sweeping 13th-minute move, the Saints fought back to make it four wins from their last five league matches.

A viciously deflected Stuart Armstrong strike five minutes later, that ricocheted off the back of James Maddison and wrong-footed goalkeeper Kasper Schmeichel, and Danny Ings’ 16th goal of the season nine minutes from time gave Southampton a richly-deserved win against a tired-looking City side.

“The guys left everything on the pitch,” added Hasenhuttl.

“We had 16 shots on goal, which for an away game is not so normal. It’s the best sign of how good we played, and how big the response was from my players, especially with the history of this game from the first clash.

“We pushed a lot of good buttons during the week, otherwise such a performance was not possible.”

VAR played a major role, ruling out three offside Leicester goals and a penalty for Saints, yet Hasenhuttl was far from concerned at the interruptions.

“It shows it’s an important tool for the Premier League, that it works fantastic,” said Hasenhuttl.

“Even if it was one time against us and one time for us, the most important thing is it is fair, and this makes it so much better for me.”

Following a remarkable run to propel themselves into second place in the league, Brendan Rodgers’ side have slumped at home of late, claiming one point from the last three matches in front of their own fans.

“I don’t really want to use that because if we are going to succeed then we have to have that robustness, that strength to keep going and going,” said Rodgers.

“The players have been brilliant up until this point, so it’s a sore one today, but we will go away and they can recover a little bit now, physically and emotionally from the game.

“And like we’ve always done, any time we’ve had a defeat, we’ll analyse it, the details, where we can be better, and we will look to improve and get three points in our next game. The clear week ahead will help us to do that.”