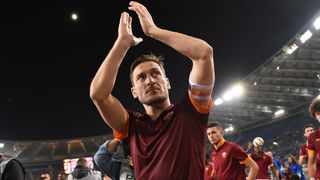 As Francesco Totti prepares to farewell the Stadio Olimpico, Sven-Goran Eriksson has described the Roma icon as a "God" in the Italian capital.

For all Roma fans, it is a day they have been dreading for many years, but Totti will bid an emotional farewell to his boyhood club in front of a sell-out crowd against Genoa in Serie A on Sunday.

With his contract expiring at the end of the season, the 40-year-old forward will play his final match for the club after more than 24 years in the first team.

It remains to be seen whether Totti will prolong his illustrious playing career next season, but the former Italy international's status in Rome is undisputed.

"He is not a hero, he is a God for Roma fans," former Roma head coach Eriksson told Omnisport. "He has been in that club for all his life."

Eriksson – now coaching in China's second division with Shenzhen FC – moved to Italy in 1984, when he took charge of Roma.

During his three years at the Stadio Olimpico, Eriksson won the 1986 Coppa Italia.

A young Totti also caught the eye of Eriksson before going on to make almost 800 appearances in all competitions, scoring more than 300 goals.

"I remember when he was very young, I would go see him training and playing now and then," said the Swede, who would not be surprised to see Totti continue in 2017-18.

"He has been great, especially for Roma, but also the national team. But for Roma, he is the one!"

"He had the technique, the vision, he scored goals. His record of games will be difficult to beat at Roma," Eriksson continued.

But where does Totti stack up alongside the greats? Eriksson said: "It's very difficult. Today you have Cristiano Ronaldo and Lionel Messi. Pele, [Johan] Cruyff, [Diego] Maradona.

"But if you live in Rome, Totti is the one for all Roma fans and I understand it. He deserves it."