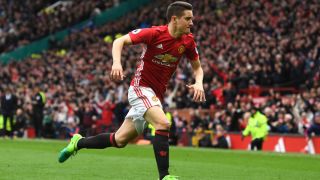 A place in the Champions League may be on offer for the Europa League winners but Ander Herrera insists claiming continental silverware is more important for Manchester United.

Europe's secondary club competition is a surprising absentee in United's gleaming trophy cabinet and Jose Mourinho has placed it at the top of his priority list at the expense of a top-four Premier League finish.

United have rotated their squad in the league to make sure their first team are fresh to face Ajax in Stockholm on Wednesday, Mourinho rolling out a number of youngsters in the 2-0 victory over Crystal Palace in the final top-flight match of the season on Sunday.

Attention now turns to the Europa League with the reward of a Champions League berth should they win it, however that is not something Herrera will be using as motivation.

"First of all it's a European trophy," he told ESPN FC.  "That's what I am going to have in my mind.

"We will have time to think about different things afterwards. It's a European trophy this club has never won. We can make history for the club, so that's the only thing I have in my mind.

"Always respecting the opponent because they want to make history, as well. But I don't have anything else in my mind apart from winning the final and trying to get the trophy for this club.

"I don't want to think about if, if, if [they qualify for the Champions League]. I just want to play the game as good as possible, try to win, and you will be able to ask me later about it."

It will be Herrera's second Europa League final having lost his first to Atletico Madrid while playing for Athletic Bilbao in 2012, and he is determined to add it to his list of achievements this time around.

"I am excited. I lost one when I was at Bilbao and so I want to win it," he added.

"We have to be calm because we are going to face a very talented team. [Ajax] are a massive club and they want to win a European trophy as well, so we have to respect them.

"It is a final, and a final is never easy. It will be tough.

"They have a lot of young players. Sometimes that means they don't have too much pressure. They want to enjoy it, and it's going to be tough. But we are Manchester United and we have to go there and try to win."