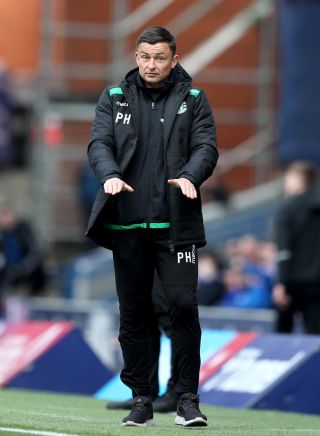 Hibernian were made to wait to seal a crucial 2-0 Betfred Cup win against Alloa with new signings Christian Doidge and Tom James scoring second-half goals on their Easter Road debuts.

Wasps manager Peter Grant has a tough act to follow in Jim Goodwin but would have been pleased with the opening half-hour in Leith, in which the visitors looked a tough outfit to break down.

Paul Heckingbottom lamented his side’s finishing in Stirling last weekend and would have felt the same in the first half hour, as Daryl Horgan and Florian Kamberi both hit efforts straight at Neil Parry from close range.

It was the visitors who grew stronger in the first half as Alan Trouten flashed a volley wide.

As the clock ticked closer to the interval Hibs looked more devoid of ideas.

The Hibees boss noticed, and introduced Scott Allan, for his return to Easter Road, and Fraser Murray at half-time. Not much seemed to change immediately, as two fumbles from Ofir Marciano threatened to give away a goal.

Midway through the second half, Doidge and Parry collided but it was the striker who nipped in ahead first, grabbing his first goal and easing the growing concern within Easter Road.

Unfortunately, the goalkeeper came off the worst on this occasion and was replaced by Chris Henry.

Doidge thought he had headed in a second five minutes later but was denied by an offside flag.

James, another new arrival, sealed the win in stunning fashion five minutes from the end, curling a fierce shot well into the top corner.