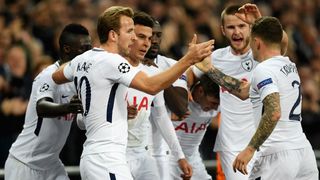 No English team has lifted the Champions League trophy since Chelsea's 2012 triumph, but the Premier League's five participants in this season's competition appear in a good position to change that.

Wins for Tottenham, Manchester City and Liverpool on Wednesday moved the tournament's English teams on to 15 victories.

Spurs and City are already assured of a place in the last 16 while Chelsea, following their 3-0 defeat to Roma on Tuesday, are the only Premier League side that is not top of a group.

Here, with the help of Opta data, we look at the numbers behind what has so far been one of the best Champions League campaigns for Premier League teams for some time.

14 - That total of 15 wins has already surpassed the number of games they won in 2016-17, when Premier League clubs tasted victory in just 14 of their 32 matches.

52.6 - The win percentage of 75 is the highest for Premier League clubs since 2013-14, when they won 20 of their 38 games, a percentage of 52.6. Chelsea were the only English team to reach the semi-finals that season, losing to Atletico Madrid.

58.5 - The top Champions League win percentage recorded by Premier League clubs across a full campaign came in 2010-11, when Manchester United were beaten in the final by Barcelona, that loss making it 24 wins from 41 games for English teams, a percentage of 58.5.

16.7 - Blackburn Rovers are responsible for the lowest win percentage recorded in the Champions League by Premier League clubs. As England's sole participant in 1995-96, they won just one of their six games, finishing bottom of Group B.