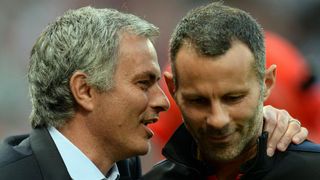 Ryan Giggs' 29-year association with Manchester United came to a low-key end on Saturday, but former winger Gordon Hill has praised Jose Mourinho for clearing the decks at Old Trafford ahead of his debut season at the club.

As his playing career came to an end, Giggs became a member of David Moyes' coaching staff and then interim manager following the sacking of the Scot in 2014, overseeing two wins, a draw and a loss before being appointed Louis van Gaal's assistant manager ahead of the 2014-15 season.

Despite the legendary status of the former Wales international at the club, Mourinho was seemingly unwilling to retain Giggs as his number two ahead of trusted colleague Rui Faria.

And while that has prompted a devoted servant to depart the club, Hill - a former United number 11 who played over 100 games for the club - feels it was a necessity.

"I'm not necessarily the biggest Mourinho fan, but having said that, I like the fact that he's replacing people like Ryan Giggs," Hill told Omnisport.

"He has cleaned the floor.

"There won't be any backstabbing with Giggs going back to [former United midfielder Paul] Scholes and Scholes going on the radio or on the TV and saying this, that and the other.

"It's a clean slate, which is what the club needs."

Hill believes Mourinho had been lined up by the United hierarchy for some time and is hopeful he can bring the good times back, predicting an overhaul of the playing and coaching staff.

"I seriously think that during that four-month lull where he was supposedly not interested and Van Gaal was in charge, he'd already signed the deal and he was able to go around and look at players without anyone questioning him," he said.

"He'll have the money to strengthen all the positions."

But Hill does not expect Mourinho to be a lasting appointment, predicting the former Porto, Chelsea, Inter and Real Madrid coach will repeat his pattern of temporary stays rather than attempting to replicate Alex Ferguson's dynasty.

"If you're going to do that, you do that at one club over a long period," Hill said.

"I don't think this is a long-term option, but if he brings back exciting football to United, then good on him.

"I think he's the right man to rock the boat, but all I'm looking for is entertaining football."