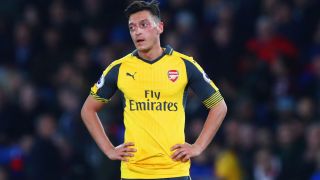 The Germany international is often criticised after poor results for his team, who sit sixth in the Premier League ahead of hosting Manchester United on Sunday.

Wenger believes there should be no queries over Ozil's hunger as he defended the 28-year-old's performance in a loss to Tottenham last time out.

"I believe last Sunday to just criticise Mesut Ozil's performance does not reflect exactly what happened on the pitch," he told UK newspapers.

"Overall I believe recently he has put a lot of effort in. He was a bit, like the rest of the team, not physically at his best.

"Overall the big players get more criticised than the others. Secondly his style is more fluid, less aggressive but it doesn't mean you want it less."

Ozil, out of contract in mid-2018, is one of Arsenal's stars and has seven goals and six assists in 28 league games this season.

The former Real Madrid man's form has been inconsistent, but while Wenger admitted to frustration, he can accept the unpredictable displays.

"At the end of the day you want all your players to be at their best in every single game so when they don't achieve that of course you are frustrated," he said.

"But we've all played football, we know we are only human beings and you have to accept the ups and downs."

Arsenal are six points adrift of fourth-placed Manchester City but have a game in hand ahead of hosting United.