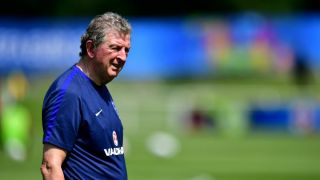 England boss Roy Hodgson has insisted he is not unhappy about his attackers' unconvincing performances at Euro 2016 and has been pleased by their group-stage displays.

Hodgson started with Harry Kane up front in England's opening two games, but dropped the Tottenham man in favour of Jamie Vardy versus Slovakia, while Daniel Sturridge and Marcus Rashford have also had playing time.

None have made a huge impression, even if Vardy and Sturridge found the net in the 2-1 win over Wales, but Hodgson sees no reason for concern just yet.

"I have always been happy with our strikers this tournament," he said at a media conference ahead of the round-of-16 encounter versus Iceland.

"You never know how someone will play when you put him on. But you know what you choose for. You always try to pick the best players for an individual game.

"Fortunately, I have options if things don't work out. That will only be to our advantage."

England will start Monday's match versus Iceland in Nice as the favourites, but Hodgson has warned it will not be an easy game.

"We want to stay in tournament and I think we're good enough. It's win or lose and we're fully aware of it. We want to win and progress," he added.

"We are the favourites, whereas they are the underdogs. But it's going to be a very difficult game either way.

"Lars Lagerback's experience is very important to them. He knows how to get the most out of the team and how to put together a team that is really hard to beat. Plus they have an excellent work-rate.

"Their ability to survive through hardships has played a large role in their success."