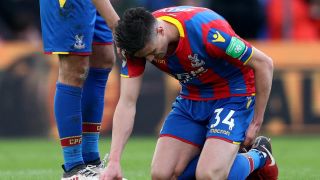 Crystal Palace manager Roy Hodgson is concerned about the club's growing injury list after defender Martin Kelly was sidelined with a hamstring injury.

Kelly, who was making his 100th appearance for the club, limped off shortly before half-time in Sunday's Premier League draw at home to relegation rivals Newcastle United.

The Eagles are already missing a host of first-team players, with Scott Dann, Jason Puncheon and in-form forward Bakary Sako ruled out for the rest of the season.

Mamadou Sakho returned from injury to replace Kelly as Palace came from behind to claim a point against Newcastle, but Hodgson remains frustrated.

"It's very annoying because we've worked hard to avoid muscle injuries," Hodgson told reporters. "That came about because of a foul – he felt a twinge in his hamstring because of the foul.

"He was moving away from a player who was pulling him back and the movement he had to make to get forward to the ball made him tweak his hamstring.

"We won't know until tomorrow how damaging that hamstring pull is. They can be very damaging as we all know, or we might be lucky because he came off straight away and as it wasn't a violent movement - it might be that he is not going to be out for as long as he might have been."

Palace were without goalkeeper Julian Speroni for the game against Newcastle, Hodgson confirming the veteran is another of his players to be struggling with injury.

"He was injured in training yesterday just before the end, when he twisted his knee in a five-a-side game," Hodgson added.

"He - and we - didn't think it was going to be that problematic straight after training, but overnight it's swollen and it's feeling stiff so tomorrow he will have a scan to see how bad that damage is."

Frustrating to not take all 3 points after a strong second half performance but we’ll keep fighting  February 4, 2018

Newcastle dropped points despite taking the lead for the second Premier League game in a row, having been pegged back at home by Burnley on Wednesday.

But Rafael Benitez was prepared to look on the positive side after Newcastle drew 1-1 for the third time in their last four Premier League matches.

"In the first half we were in control, doing well, we had another chance to score the second goal," Benitez said. "In the second half the counter-attack made a big difference.

"If you don’t score the second goal then you are under pressure and you have to defend. I was happy with how we were defending against very good strikers. It could be better, but it could be worse. It is one point in the end and, more or less, that is fair.

"It was very clear from the beginning that we were working really hard, particularly towards the end when we were blocking and running. That is the only way for us and the others towards the bottom of the table."