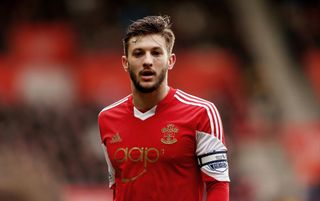 Left-back Shaw is expected to join Manchester United, while Southampton captain Lallana appears set for a move to Liverpool with other clubs interested in both players.

Both were named in England's 23-man squad for Brazil 2014 on Monday, but Hodgson desperately wants to avoid unneeded distractions at the tournament.

He said players needed to be focused solely on international duty when with England and wants Shaw and Lallana to sort out their club futures before the squad flies to Miami on June 1.

"I have made it clear to them already and I think they are perfectly happy with it. England is England and your club is your club. The two are not married together," Hodgson said.

"Your club future is what it is and it will be taken care of outside of England time. That is basically all I can do.

"I was asked would you like all of this to be sorted before you go to Miami. Of course I would. It is not an ideal world and that might not happen but the one thing I am going to be very firm on.

"When we are together with England that is what matters and if you have anything to resolve you do it outside that time. I am thinking about medicals in particular. I can't stop phone calls.

"I am definitely not going to have agents swirling around or this player has got to leave the camp. I would expect the players to understand that."