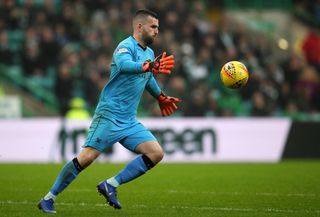 Livingston manager Gary Holt believes Liam Kelly must think carefully about what is best for his long-term career after the goalkeeper was linked with a summer move.

Celtic, Hamburg and a host of Sky Bet Championship clubs were reported to be monitoring Kelly’s situation amid claims he has a £50,000 release clause in his two-year contract.

But Holt revealed Livingston were in talks over a contract extension for the 23-year-old, who rejoined the Ladbrokes Premiership newcomers last summer from Rangers after an earlier loan spell.

The Livi boss said he has not “heard a thing” from other clubs and was not fearing losing his number one, who has kept 16 clean sheets this season.

“We are prepared to lose everybody,” Holt said. “If you are playing at this level and showcasing your talents and getting recognition, then any club will come calling.

“If you look at the best players in the world, Eden Hazard at Chelsea, suddenly Real Madrid want him. I’m sure Chelsea don’t want to lose him but that’s what happens when you are playing really well at your club: people take notice.

“So we will wait and see. He is under contract, the club are talking to him regarding a new one, and we will see how it plays out.

“But players will leave, that’s part and parcel of the game, so I’m not really that concerned by it.”

However, Holt feels Kelly should carefully consider any offer that might come his way this summer.

“I’ve always said that teams only want your good players,” Holt said. “So it shows what Liam is doing. But he is playing football and he has only played 30-odd games at this level.

“So it’s something Liam will have to weigh up as well. He has got to think about what’s best for his career.

“He took the choice to come here because he wanted to play, so he will want to continue that. You don’t want to take a knock in your career by going somewhere maybe as a number two fighting for the number one.”

Holt added: “You want boys who are willing to put themselves above the parapet and play men’s football.

“He could have stayed at Rangers. I’m sure other boys could stay at clubs and pick up money but not play, not have a career.

“If you come here you will get a chance to play football if you are good enough and want to work hard enough.

“Liam has done that but he knows he needs to keep doing that to improve.”