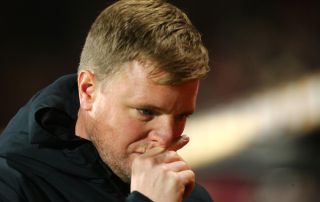 Eddie Howe admits goal-shy Bournemouth have lost belief in their ability to hit the net after firing another Premier League blank.

The relegation-threatened Cherries are the joint lowest scorers in the division following Sunday’s damaging 3-0 home defeat to fellow strugglers Watford.

Howe’s men have failed to score in six of their last eight top-flight games and registered a solitary shot on target against Nigel Pearson’s resurgent side.

They have struck just 20 times in 22 fixtures this term, a record shared with the Hornets and Crystal Palace and not helped by lengthy droughts for strikers Callum Wilson and Dominic Solanke.

“That’s probably been our biggest challenge because historically we’ve always been free-scoring,” Howe said of the lack of goals.

“That’s probably where the feeling has gone missing.

“The creativity, the feeling we’re going to score, it’s so important to any team, you need to have that belief in you.

“Part of our creativity has been missing with some of the players that haven’t been available. But we have to do better in that respect.”

Bournemouth ended the weekend second bottom of the table and two points from safety after being leapfrogged by Watford.

Their latest defeat of an alarming slump, inflicted by goals from Abdoulaye Doucoure, Troy Deeney and Roberto Pereyra, was a ninth in their last 11 Premier League fixtures.

Watford’s comfortable win means they have taken 13 points from a possible 18 since Pearson became the club’s third head coach of a tumultuous campaign.

After being away from the Premier League since being sacked by Leicester in 2015, the 56-year-old initially questioned his motivation to return before coming back with “something to prove”.

“I’m just glad to be back in work,” said Pearson, who was appointed last month on a contract until the end of the season.

“It’s nice to find myself in a situation that I didn’t think I would do and that is working in the Premier League – I didn’t think that would happen again.

“I, like the players, maybe have something to prove – not that that’s high on my agenda, I want to enjoy this challenge and see where it takes me.

“I wondered whether I would have the enthusiasm or the drive and desire to do it, and I’ve been pleasantly surprised that I have, which is good.”