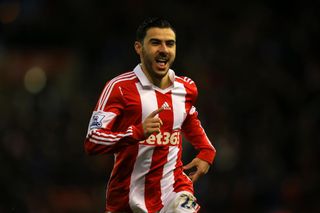 Stoke manager Hughes brought Assaidi to the Britannia Stadium on a season-long in August, after the winger found his opportunities at Anfield limited.

The Morocco international has responded with three goals in 18 Premier League appearances, and has been an important part of Stoke's first-team squad this season.

Assaidi himself has previously expressed a desire to return to Liverpool at the end of the camapign and attempt to break into Brendan Rodgers' plans, though Hughes is hopeful of keeping him in Staffordshire.

"Ozzy (Assaidi) isn't our player - but he has done really well and we will talk about his future," Hughes said.

"But I don't know where his future lies because we haven't had those conversations yet."

Stoke were defeated 1-0 by Tottenham on Saturday, but remain on course for their first top-10 finish in the Premier League.