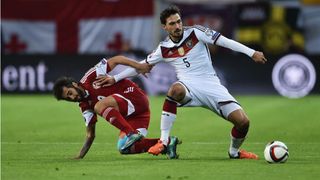 Mats Hummels acknowledged Germany must improve in the final third if they are to make an impression at Euro 2016.

The world champions sealed top spot in qualifying Group D with a hard-fought 2-1 victory over Georgia on Sunday, with substitute Max Kruse grabbing the winner.

It was a far from convincing result for Joachim Low's side, however, with Manuel Neuer having to pull off a string of excellent saves to keep a determined Georgia at bay.

And Hummels, who made the mistake that led to the Republic of Ireland's decisive goal in Germany's previous qualifier, insists that the onus is now on the side to become more clinical in front of goal.

"Of course it is annoying if we do not seize the opportunities, because it would make our lives much easier. This is a matter on which we have to work," the Borussia Dortmund defender said.

"We knew that the Georgians are technically much stronger than it says the world rankings. This is something that the coach clearly addressed before the game.

"In some situations, the Georgia players were running up very freely with two or three players to us because we were pushing forward as we had not taken our chances. That is hard for any team."

Meanwhile, Georgia coach Kakhaber Tskhadadze hailed his side for their plucky performance, claiming that it indicates just how far they have come over the course of qualification.

"I need to thank my players for a great performance. I am very proud of my team, because we gave the world champions a run for their money," he said.

"I don't think that any other opponent has created more chances against them during this campaign. It was important for me to see that we have developed.

"My first match as coach was against Germany in Tbilisi and today we proved that we are headed in the right direction. This was the best match since I took over."