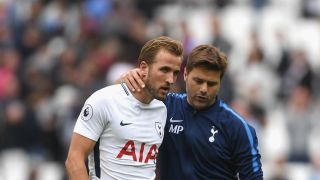 Mauricio Pochettino says he is "in love" with Harry Kane after the England man once again did the business for Tottenham in a London derby, scoring twice to sink West Ham 3-2 on Saturday.

Kane struck twice inside four first-half minutes to put Spurs in control of a match that West Ham had dominated up to that point at London Stadium.

The striker took his tally in capital city clashes to 21 goals in just 29 games, helping Spurs put to rest painful memories of last season's defeat at the Hammers, a result which ended their title hopes.

And Pochettino admitted he has begun to run out of superlatives for his star man.

"He's a great striker, his mentality is fantastic, he's so humble. I think, yes, I am in love with him!"

Kane himself said his spectacular derby record is a happy coincidence of wanting to score against every team he plays.

"I see stuff go round on social media and things like that but as I've said before I don't really think about that too much," he said.

"I want to score against every team I play against, for some reason London derbies seem to suit me.

"It's fantastic, I'm delighted to get a couple of goals and to help the team to get the three points."

Spurs were made to hold on for their win, as Javier Hernandez and Cheikhou Kouyate scored either side of Serge Aurier's dismissal for two bookings.

The former Paris Saint-Germain defender endured a testing time on his first Premier League start before a needless scything tackle on Andy Carroll earned him his marching orders.

"I think Serge was good, but I think the performance of the whole team was good," Pochettino added.

"It's true when you play this type of game, that it was a real derby, in a very difficult pitch, stadium, always you need to try to find the feeling and find the way to start the performance.

"In the Premier League, it's completely different to France but I am happy with him, his adaptation is fantastic, he's very welcome from everyone on the team and the club.

"He was a little bit unlucky today because I think he didn't deserve the first yellow card but that is football. It's good for him to learn and understand that the Premier League is completely different to Ligue 1 in France."