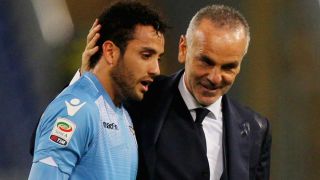 Lazio coach Stefano Pioli insists he does not control any transfers as Manchester United reportedly ramp up their attempts to sign Felipe Anderson.

Felipe Anderson has been linked to a move to the Premier League for some time, with Lazio sporting director Igli Tare recently revealing the Serie A side turned down a €50million from United last August.

Pioli said he has not heard about any bids from United for the 22-year-old in the January transfer window, but mentioned he is not the one who makes the final call on player movements.

"Any answer I give will be interpreted how you want," he told Rai Sport.

"All I know is the club has not told me anything, and Felipe Anderson is working to find his best form.

"There’s no news, but I coach the squad and do not control transfers."

Lazio crashed out of the Coppa Italia quarter-finals on Wednesday after suffering a 1-0 loss to Juventus, while Pioli's men are sitting ninth in the Serie A table.