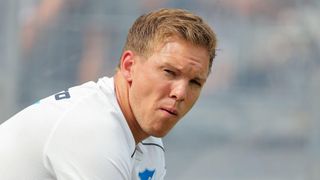 Julian Nagelsmann has revealed he rejected the chance to succeed Zinedine Zidane at Real Madrid.

The 31-year-old is regarded as arguably the finest young coach in Europe, having guided Hoffenheim to the Champions League in each of the past two seasons - an achievement which prompted Bundesliga rivals RB Leipzig to recruit his services from 2019-20.

Nagelsmann will see out his final year at the Rhein-Neckar-Arena before joining Leipzig, but it could have been a far different story had he accepted Madrid's advances after Zidane's shock resignation in the wake of a third straight Champions League triumph.

At such a young age, Nagelsmann - although flattered by the interest from the Santiago Bernabeu - felt going abroad to take on such a huge role would not be a wise move, with Julen Lopetegui taking the reins instead following an acrimonious departure from the Spain job on the eve of the World Cup.

"Who would hang up the telephone? Universe Football Club doesn't exist, so there's no bigger club than Real Madrid.

"But I am 31 years old, I will have another chance. I didn't want to move countries.

"If my coaching career continues reasonably, you may have another chance to take on a club in this category later. Also for family reasons, it did not fit so well to go abroad.

"The big problem of our society is the tendency for maximisation. It's all about having more than your neighbour. To have the biggest car, the biggest bank account, the biggest house. I do not want to be there."