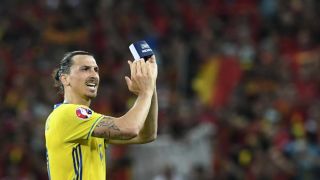 Manchester United have left Zlatan Ibrahimovic, Anthony Martial, Morgan Schneiderlin, Bastian Schweinsteiger and Marouane Fellaini out of their squad for a pre-season tour to China.

The quintet have yet to join up with their team-mates following their Euro 2016 exploits and will consequently miss the friendlies versus Borussia Dortmund on Friday and Manchester City on Monday.

New arrivals Eric Bailly and Henrikh Mikhitaryan are both named in the 25-man squad, while Wayne Rooney, Marcus Rashford, Chris Smalling, Paddy McNair and David De Gea - all eliminated from Euro 2016 in the round of 16 - are travelling, too.

Fit-again Luke Shaw has also been included, while promising defender Axel Tuanzebe makes the pre-season trip after impressing in the friendly win over Wigan.

United take on Galatasaray on July 30 in Gothenburg after they return from China, while Rooney's testimonial against Everton on August 3 and the Community Shield on August 7 will give Jose Mourinho more chances to assess his squad ahead of their Premier League opener against AFC Bournemouth on August 14.