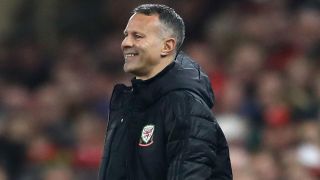 Ryan Giggs declared his pride at Wales' performance despite going down to a 2-1 defeat against an "efficient" Denmark.

Goals from Nicolai Jorgensen and Martin Braithwaite secured Denmark promotion to the top tier of the Nations League as they completed the double over their Group 4 opponents.

Wales did pull one back through Gareth Bale during a dramatic conclusion, the Real Madrid forward finding the net just 84 seconds after Braithwaite had made it 2-0, but the hosts came up short in Cardiff.

Despite the disappointing result, Giggs was able to look back positively on his young team's campaign in the new competition, even though they missed out on clinching a place in League A.

"I thought it was an exciting game, two evenly matched teams, chances wise. Maybe we even pipped it," the former Manchester United player told Sky Sports.

"We came up against a good side, efficient and good at what they do. They win games and get the job done.

"I said to the lads that I'm proud of them. They kept going until the end, exciting me and exciting the crowd.

"You see David Brooks taking players on and it's exciting, but we need to learn the other side, the discipline that Denmark are so good at.

"They've been together a long time and are a difficult team to beat. Overall, considering the two games, there was not a lot to choose between us."

Wales had their chances to take the lead in the first half, Bale and James Chester both failing to hit the target with headers, before Jorgensen finished off a rapid counter to put Denmark 1-0 up.

Giggs admitted the opening goal was crucial in the contest, particularly as it gave the visitors something to cling onto after the interval.

"They don't give away many goals, so when they go a goal ahead they very rarely give away the game. They fall back into their shape and are disciplined," Giggs added.

"Up until then, though, it was even. We had a few headers go just past the post and a couple of injuries, so things didn't go our way.

"But we were still in the game until the end."