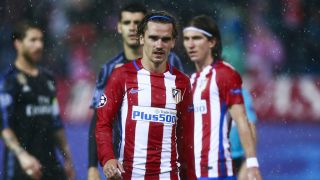 Antoine Griezmann says he is ready to leave Atletico Madrid in order to pursue a dream of winning trophies consistently.

The France international has long been linked with a move to Manchester United or Real Madrid but appeared to commit his future to Atletico last week when he light-heartedly stated that he would only leave to join NBA side the New York Knicks.

However, Griezmann caused a stir on Monday when he said that his chances of moving to Old Trafford this year were a "six out of 10" as talk began to build of a possible world-record offer from the Europa League finalists.

The 26-year-old has followed up those comments by saying that his ambitions could tempt him to leave Atletico in the next transfer window, although their own recruitment drive could yet convince him to stay.

The "fashionable" Premier League, the Bundesliga or even the top flights in China and the United States could be appealing, he said.

"We finished third in LaLiga. It was the club's objective but the players want more," he said at the release of his autobiography on Tuesday, as quoted by L'Equipe.

"I want to win trophies. I've come to a point where I play really well and score goals but it's not enough. That's it.

"To win trophies is what I'm going to look for this summer from the moment I decide my future.

"I reached a final and a semi-final of the Champions League with Atletico. We're close but we're missing something.

"I'll see what the club will do. It depends on transfers. I don't know if they understand but all the players, the media, my family, know that I like football to win trophies, to live strong emotions. I want to taste it.

"If I have to move today it will be no problem. It could be to England because that's fashionable, to Germany, China or the United States. I'm ready to go."

Griezmann registered 26 goals and 13 assists in all competitions for Diego Simeone's side last season.