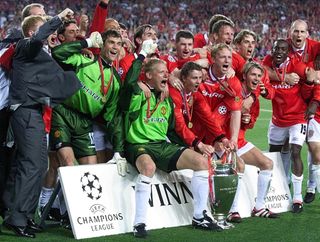 Peter Schmeichel was captain on the night that Manchester United wrote their name into the history books by sealing the Treble.

Having already lifted the Premier League and FA Cup, the jaw-dropping 2-1 comeback win against Bayern Munich in the Champions League final remains unmatched by any English club 20 years on.

Schmeichel could scarcely have wished for a better final appearance for United and told Press Association Sport about that unforgettable 1998-99 campaign under Sir Alex Ferguson.

“We had this incredible season,” Schmeichel said.

“A season starts in August, but the incredible bit started just before Christmas when we played Middlesbrough at Old Trafford – the only game, incidentally, that Sir Alex wasn’t there for in my time.

“I can’t even remember why he wasn’t there, but we lost the game 3-2 and we were poor. Really, really poor.

“Probably the worst game we’ve played – and we’ve had some terrible results, worse than that.

“But in terms of how we played and how we approached the game, it was just embarrassing.

“We were sat in the dressing room afterwards and we basically looked each other and said: ‘This wasn’t good enough, we’ve let the club down, we let the fans down, we let the manager down who wasn’t there – this is not going to happen again’.

“And we agreed on that. ‘That’s not going to happen, let’s just go out there and win whatever game we play now – we have to win every game’.

“So, it kind of started out as something let’s get our thoughts onto the next day but then it became a joke.

“You know, OK, so we say we’re going to win the rest of the games so – I can’t remember the number, let’s just say it’s 38 games in all the cups – if we win 38 games, we’ve had this incredible season. Unbelievable season. We’re making history.

“And suddenly we’re there. Three games to go! If we win the next three games… and we didn’t lose a single game up until then.

“We’ve got the last game in the Premier League against Spurs, the FA Cup final against Newcastle, the Champions League final against Bayern Munich.

“It was there. Win the next three games and we’ve had this incredible season, we’ve made history – and it was a realistic thing.”

Andy Cole and David Beckham scored as United came from behind to beat Tottenham on the final day to clinch the Premier League before the second part of the Treble was secured thanks to Teddy Sheringham and Paul Scholes’ strikes in the FA Cup final against Newcastle.

“What happened was we were in this kind of bubble,” Schmeichel added. “There was nothing in us that could even think about, contemplate that we could lose a game.

“Why should we lose a game? Look around, look at the players, look at the guy sat next to you – we don’t lose games.

“So that’s not being arrogant, it’s just an incredible belief in our own ability with a manager like Sir Alex reminding us of how good we were and letting us do exactly what we wanted to do on the pitch. And we did that.”

United went into the Champions League final at the Nou Camp without two of their key men and Schmeichel explained the changes that the side had to make.

“Then we get to the Champions League final, where two of the most important players that we had in the squad, Paul Scholes and Roy Keane, were suspended for this game,” he said.

“We had to make so many changes, so a lot of what we were very good at.

“For instance, having David Beckham on the right-hand side crossing the ball into Cole and Dwight Yorke is something we didn’t have because David Beckham had to play in central midfield.

“So we had Ryan Giggs playing in his position because the only other alternative was to play Jesper Blomqvist on the left and he could only play on the left, so not only did he take Ryan away from the left-hand side, you also put him on the right and we didn’t have the weapon of David Beckham.

“As good as Ryan was, he couldn’t cross the ball on his right foot as David could.

“So, there was a lot of things we didn’t have in that game and, do you know, when it got to the crunch time with five minutes to go, we had to throw caution to the wind. And that’s where we excelled.

“That’s probably the best team ever to do that – simply just commit people forward, bombard the other team and still believing that we could turn this game around.

Barcelona is not the worst place for @ManUtd to go💪🍾@ChampionsLeague#ComeOnOlepic.twitter.com/KurwdH4vvi— Peter Schmeichel (@Pschmeichel1) March 15, 2019

“And as history will show, we got a corner kick which we equalised in added on time.

“And then one minute later we got another corner kick and we scored, and we turned being 1-0 down to a 2-1 victory.

“But I think at the end of the day, that’s just who we were. We just did not contemplate losing.

“The fact that no-one’s ever done it, that speaks for itself. It’s really difficult because it’s one tiny mistake.”