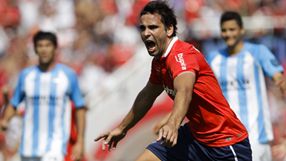 Striker Facundo Parra scored twice for the home side in the biggest game of the first division since the relegation last year of River Plate whose derby with Boca Juniors is the Argentine 'Superclasico'.

Racing had teenage midfielder Bruno Zuculini and Colombia striker Teo Gutierrez sent off between the 58th and 69th minutes.

It was Gutierrez's second red card in the championship.

Midway through the Clausura championship Independiente are mid-table with 13 points from 10 matches.

Racing have nine points under former Argentina coach Alfio Basile who, according to television reports, has decided to resign.

Basile's side took the lead following a defensive blunder by home captain Gabriel Milito midway through the first half.

Striker Gabriel Hauche latched on to the former Barcelona centre-back's poor clearance on the right wing, raced into the box and passed square to Gutierrez who tapped the ball in.

"It was my terrible mistake that allowed Racing to go ahead but it was their only clear chance. We played better and deserved the win," Milito told Futbol Para Todos.

Independiente, who won the last of their 14 league titles 10 years ago, had more of the ball and a defensive error at the other end allowed them to equalise in the 36th minute.

A curling free-kick on the left by midfielder Osmar Ferreyra was not cleared and the unmarked Parra fired high into the roof of the net.

Hauche almost put seven-times champions Racing ahead again from the restart, charging on to the ball through a gap in the defence but he shot high over advancing goalkeeper Adrian Gabbarini.

Racing's holding midfielder Agustin Pelletieri cleared an Independiente chance off the line two minutes into the second half as the home side continued to take the game to their opponents.

Zuculini was shown the red card and Parra converted from the spot to put the home side 2-1 up.

Gutierrez, who has a reputation for being involved in controversial incidents, was then dismissed for dissent after apparently insulting Pezzotta.

Pelletieri almost equalised for Racing in the 78th minute before Independiente killed them off with goals in added time from substitute Patricio Vidal and Rodriguez.