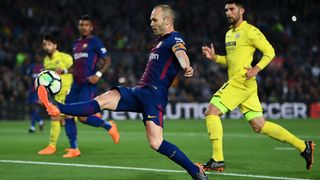 Ernesto Valverde says departing star Andres Iniesta still teaches him something in every match after the Barcelona midfielder produced a glittering performance against Villarreal.

Barca thrashed Villarreal 5-1 at Camp Nou on Wednesday, moving a step closer to completing the whole LaLiga season without suffering a defeat.

Iniesta, 33, is leaving at the end of the campaign and produced another magic moment by setting up Lionel Messi's goal - his side's third - with a magnificent pass, as part of a display that saw him pull the strings throughout.

"Iniesta teaches you something in every match," an impressed Valverde was quoted as saying by Marca after the match.

"There's nothing more to say about him. He's always on point, just like Messi is, and for the moment we are enjoying having him."

Valverde also explained his decision to hand Jasper Cillessen a first league start of the season in place of Marc-Andre ter Stegen.

"My idea is that we'll end the season with Marc," said Valverde after Cillessen produced a solid performance, only being beaten by Nicola Sansone's wicked deflection in the second half.

"I wanted Jasper to play a league match because he has given us a lot this season. It was a gift for him, it shows the recognition he has earned, we believe he is a great goalkeeper."

Ousmane Dembele scored twice late on, Philippe Coutinho and Paulinho having netted for Barca prior to Messi's strike.

But it was Iniesta's performance that stood out for defender Nelson Semedo, who also had positive words for Dembele after the forward produced a magnificent solo effort for his second goal.

"As a player and a person he [Iniesta] will leave a big hole, it is a shame that he is going but that is life," Semedo said. "We wish him the best and we'll miss him.

"Dembele is showing his value from game to game. He had a great game, he's got a lot of quality and he will help us a lot.

"We value [the unbeaten record] a lot, it is something that we have been working for all season."

Barca, now 43 league games unbeaten in a run that stretches back to last season, face Levante and Real Sociedad in their final two games.