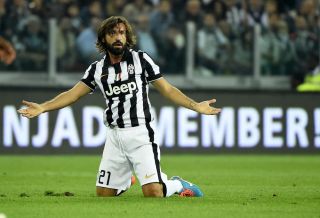 Bonaventura was found to be suffering with a thigh injury and was subsequently ruled out of the Euro 2016 qualifiers against Azerbaijan on Friday and Malta next Monday.

As such, Conte has called up Pirlo to his squad with the pair linking up again after their time together at Serie A champions Juventus.

Pirlo made his first appearance of the season in Juve's 3-2 win over Roma on Sunday following a hamstring injury.

Conte spoke at a media conference on Monday, where he defended his decision to call up Graziano Pelle at the expense of Mario Balotelli.

Southampton striker Pelle has been rewarded for his fine start to life at St Mary's Stadium with a first international call-up, while Balotelli has struggled at Anfield.

Former Feyenoord man Pelle has five goals to his name in all competitions this term, but Balotelli has scored just once in eight games since moving from Milan.

Conte explained that he will be keeping a close eye on Balotelli's form, adding that Pelle deserved his chance with the national side.

"Mario has started a new path. It's not an easy one and I believe he must be given the necessary time to adapt at Liverpool," said the former Juve boss.

"We are following him just as we monitor all Italians that play abroad. I make selections not exclusions, which is something completely different.

"Graziano represents what I've always said. Meritocracy leads to a place in the national team for a player that in two years has scored 50 goals.

"Today he is becoming a star in the Premier League after an adventure in Holland.

"I am curious to see him from close range in order to understand if he can help us. He deserved this call up from all points of view."