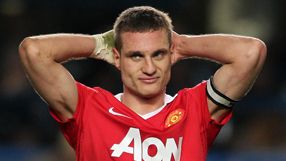 "Coach Vladimir Petrovic spoke to Vidic and it's been decided that he should stay with his club Manchester United for further treatment," the FSS said on its website.

United captain Vidic has missed his club's last two games - Tuesday's 2-1 Champions League win over Olympique Marseille and Saturday's 1-0 league victory against Bolton - after picking up a knock in the 2-0 FA Cup win over Arsenal earlier this month.

Birmingham City striker Nikola Zigic is also doubtful as he is recovering from a groin injury.

Serbia, who are fifth in Group C with four points from as many games, are at home to Northern Ireland on Friday behind closed doors as they serve their one-match crowd ban because of a riot their fans caused in Italy last October.

Group leaders Italy, who have 10 points from four games, were awarded a 3-0 walkover against Serbia, whose ultras forced the game in Genoa to be abandoned after only six minutes when they threw flares at home fans, players and police.

The Serbs are away to Estonia on March 29.