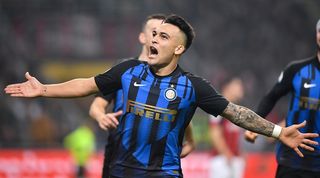 Barcelona are rumoured to be on the hunt for a new striker as their own Luis Suarez turns 33 this January.

There are growing concerns over the Uruguayan's ability to maintain consistent goalscoring form that matches that of previous seasons.

The Catalan club are reportedly keen to find the next big number nine in world football to replace Suarez.

There were rumours of Kylian Mbappe or Harry Kane being targeted by the La Liga champions.

However, it's now believed Inter Milan's Lautaro Martinez has been identified as a potential signing, according to Tuttosport (via Sempre Inter).

The Argentinian striker joined Inter in 2018 for a fee of £12.6m from Racing Club.

Martinez has a contract with Inter until 2023, but the Serie A giants are concerned by his current release clause which stands at £95.3m.

There are reportedly fears that Barcelona will not hesitate to activate the clause should Martinez continue to progress as he has been.

The 22-year-old has scored five goals and contributed two assists in ten games for Inter so far this season.

It's reported that his form has been good enough to earn him a performance-based salary increase.

Inter now plan to neutralise the threat of Barcelona swooping for Martinez, possibly by removing his release clause in any new contract.

The club are reportedly due to hold talks with the player's agent Beto Yaque 'in the coming days' to discuss a new deal.

Barcelona will be content with Luis Suarez for now, as they wait and see what transpires in Milan.

Suarez has seven goals in nine games in all competitions so far this season.