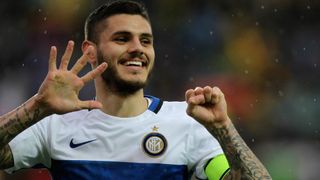 Inter president Erick Thohir insists Mauro Icardi is not for sale, having rejected offers from Serie A rivals Napoli among others.

Napoli had reportedly put in a bid for the Argentine forward in the hope of replacing the outgoing Gonzalo Higuain, who joined Juventus in a big-money €90million deal on Tuesday.

However, Thohir warned Icardi is not for sale, with the Italian club eager to hold on to their captain and star striker.

"We extended his contract a year ago. We're like a family and we can always talk if there are problems or discuss what we'd like to achieve together in future.

"He's our captain and an important player for us. We're very happy with him."

Thohir also responded to rumours coach Roberto Mancini was set to step down from his role at the club, having been left frustrated with their dealings in the transfer window.

"Roberto Mancini is our coach. Here in the [United] States, he's working on the pitch with the team and off it with the management. I believe very much in his work," he said.

"We're all working together and over the next two days we'll meet again to help each other.

"I have great belief in our management structure. We work together as one, not individually."