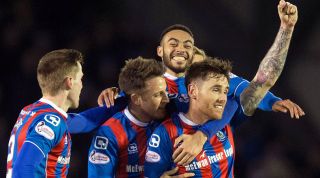 Inverness manager Richie Foran is expected to name a strong starting line-up against 100 kids at the Caledonian Stadium on May 24. The match is to be 30 minutes long, with 15-minute halves.

Inverness will give the opportunity to the first 100 kids who purchase, or get permission to buy, the first 100 junior home shirts of their new 2017/18 kit.

The manager of the kids team is to be a former star player of the club, who may well have to try to teach his large squad of minors the fine art of parking the bus.

"We are really excited for the biggest home game promotion, giving some of young supporters the chance to line up against their heroes in a special game which has never been done before on this scale in the UK," the club's commercial manager Iain Aulds told the Daily Record.

“I know that this promotion will go down very well with our fans.”

If all else fails, it's a good way of trying to prove Alan Hansen wrong (again).