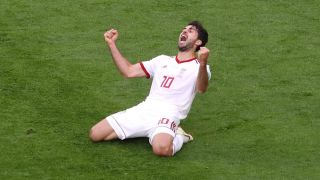 Karim Ansarifard is confident Iran will beat Portugal to qualify for the next round of the World Cup ahead of Monday's winner-takes-all Group B clash.

Iran are third and only a point adrift of European champions Portugal and Spain leading in to the third and final matchday in Saransk.

Carlos Quieroz's men were unfortunate not to at least claim a point against Spain on Wednesday, having an equaliser ruled out by VAR.

It was an impressive performance against the 2010 world champions and Olympiacos forward Ansarifard said Iran are ready to advance to the last 16 for the first time in their history.

"We've learned so many things from the previous World Cup and know how to play Portugal in this edition," Ansarifard said.

"Iran is led by the best coach in the world and he has taught us how to fight against our opponents. He has helped us a lot and we are ready to defeat Portugal in our last group match."

Ansarifard added: "After conceding the goal against Spain, we created so many chances. We did our best but I think we were not lucky at the end of the match. We will fight for our pride in the match against Portugal.

"Our strategy against Spain was to defend and we wanted to find the back of their net through the counter attack. We also created some scoring chances but lacked the cutting edge. Portugal have many stars but we can defeat them as a team."

Ronaldo has scored four goals in two games following a hat-trick in the opening match against Spain, which was followed by the winner in a 1-0 victory over Morocco.

Having played their part in a thrilling 3-3 draw with Spain, Portugal were unconvincing as they eliminated Morocco.

Portugal defender Jose Fonte said: "We have the ability to do well, we believe in our work and we have made a pretty good start to this competition but there is room to improve."

Based in Russia, Sardar Azmoun could make a big impact against Fernando Santos' Portugal. Rubin Kazan forward Azmoun has not scored at the World Cup so far but with 23 goals in 35 international appearances, it is only a matter of time.

It really is hard to look beyond Cristiano Ronaldo, especially when he is in this kind of form. The 33-year-old has shown no signs of slowing down, taking his international tally to 85 goals against Morocco. Ronaldo has scored Portugal's last five goals at the World Cup – the last player to do so for their nation was Russia's Oleg Salenko with six in a row in 1994.

- This is Iran and Portugal's second encounter at the World Cup after 2006. Portugal won 2-0 thanks to goals from Deco and Cristiano Ronaldo – it was Ronaldo's first ever goal in the tournament.

- Portugal have won three of their four World Cup games against Asian opposition, losing against host nation South Korea in 2002.

- Iran are winless in seven World Cup meetings against European sides (D1 L6), with that draw coming against Scotland in 1978.

- Portugal's 1-0 win over Morocco last time out was their first World Cup clean sheet since a goalless draw with Brazil in 2010, ending a run of five matches without a shutout.

- Iran have never won their final game of the World Cup group stages (D1 L3), scoring three and conceding 10 in these matches.

- Should he feature in this match, Joao Moutinho will make his 113th appearance for Portugal, overtaking Nani (112) to become the third most capped player in the country's history, behind only Cristiano Ronaldo (152 before this game) and Luis Figo (127).