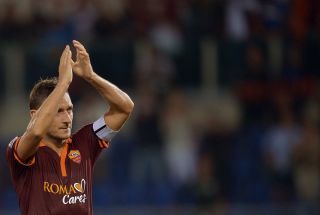 Legendary playmaker Totti officially retired from international duty in 2007 after being part of the Italy squad that won the 2006 World Cup, but has been in stunning form for his club side Roma this term, captaining them to seven wins from seven Serie A games.

This has led to many in his homeland clamouring for him to once again play for Italy, who have already secured their place at Brazil 2014 ahead of their final qualifiers against Denmark on Friday and Armenia next week.

And goalkeeper Buffon believes coach Cesare Prandelli should seriously consider asking the 37-year-old to return to the Azzuri fold, regardless of his age.

"As I've already said, Totti can be considered a sort of immortal player under certain points of view," the Juventus man said.

"His current physical and mental conditions along with his technique and natural skills make him a player able to make the difference in any occasion and at every age.

"Thanks to his performance, Totti is proving once again that he has always been - and he still is - a champion, therefore it's normal that everyone talk about him in such a positive way.

"We also have to say that it's October and the World Cup is close, but it won't take place before eight or nine months.

"If he would still be in such conditions, no one would have any doubt."